Classroom on the Job 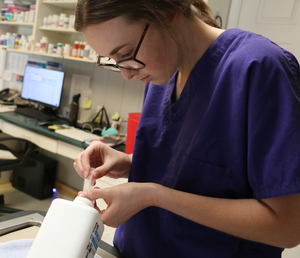 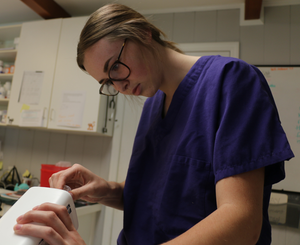 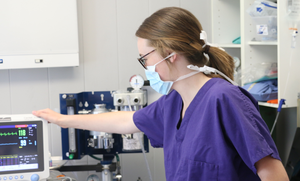 A lot can change in the blink of an eye, much less seven months.

Back in November 2017, Michael Shirley told Trisha Murphy, who was the Director of Education and Workforce Development for the Rutherford County Chamber of Commerce, that he was interested in hiring a summer intern.

There was one issue.

He and wife Dr. Amy Shirley had not yet officially purchased a business, but he was “90 percent sure” they would be ready to host a rising high school senior by the first week of June when the four-week program started.

“Part of our mission here is education,” said Michael, who was determined to be ready for Black Fox to participate in this year’s summer internship program hosted by Rutherford Works and the Chamber of Commerce. “We signed up (for an intern) before we even had a contract on purchasing this clinic.”

As a former agriculture instructor at Riverdale High School, Michael added, “It’s important to me that we’re active in our community and working with our young people who are thinking about following this career path.”

Black Fox Veterinary Hospital is just one business throughout Rutherford County participating in the third year of the program.

The purpose of the program is to train a new workforce, according to Michael, who added, “and that’s what we’re trying to accomplish.”

“My expectation going in is to expand my knowledge,” Kuhnle said.

Michael said he knew applying at Black Fox and interviewing with him was a risk for Kuhnle and the others because he and Amy did not even own the clinic at the time of Kuhnle’s interview.

Kuhnle did not see it as risky.

“I was looking for experience,” she said, “and I heard a lot of really great things about the Shirley family.”

While Michael and Amy are establishing themselves as the new owners of Black Fox Veterinary Hospital, Roscoe Brown has provided heating, cooling, insulation, plumbing and geothermal needs in Rutherford County for more than 75 years.

Hunter Ramsey, a rising senior at Siegel High School, was selected as a service intern at Roscoe Brown. Service Manager Tommy Crook, who oversees Ramsey and Tyler Hollis’ participation in the internship program, said after interviewing three candidates, he asked himself, “Do they want to be here?”

“I can teach somebody how to do this business,” Crook said. “I can teach them how to be a good business person, but I can’t make them care and want to be here. That’s a value you just can’t teach.”

Ramsey will ride along with a service tech on maintenance calls and demand service calls. The job is expected to vary from day-to-day with some calls requiring Ramsey to climb up into hot attics or get underneath houses.

Following his first day, Ramsey said, “I was expecting to go under a few houses.”

Crook added, “That’s going to happen. That’s undoubtable. Now whether he likes it after he gets done with that may be a whole other story.”

Ramsey will be learning the values of a business, Crook said, which includes everything from time management to the extent to which Roscoe Brown goes to in making sure customers are taken care.

“That’s something (Ramsey) can take into anything he does moving forward,” Crook said.

Ramsey and his friends are in the process of opening their own online retail outlet for men’s fashion. While the two businesses are very different from one another, he has identified common characteristics and is hoping his internship will help him learn how to professionally conduct business with customers.

“It’s a valuable program,” said Ramsey, when speaking of the summer internship program.

Michael, who will join his wife full time at Black Fox after his contract with Rutherford County Schools is up at the end of June, structured Kuhnle’s four-week internship as if it were a syllabus for a career class.

She will spend one week in each of the clinic’s four zones — front desk, kennels, in-patient and out-patient and then surgery — with each experience building on the past experiences. Kuhnle will have specific experiences to master each week.

“There’s a lot that she’s going to be taking in,” Michael said, “so we’ll keep it simple.”

There will be tests and expectations are higher than in the classroom, explained Michael, who added, “A mistake here could cost the life of a pet.”

Naturally, Kuhnle admitted, “I’m a little nervous, but, of course, that is with anything new.”

PHOTOS / KEITH RYAN CARTWRIGHT
Mia Kuhnle is pictured on just the second day of her summer internship with Black Fox Veterinary Hospital. Owner Michael Shirley said he hopes the experience helps Kuhnle make an informed decision as to whether or not she pursues becoming a veterinarian in college. In the meantime, he added, "Somebody is going to get a good tech. It may be us."